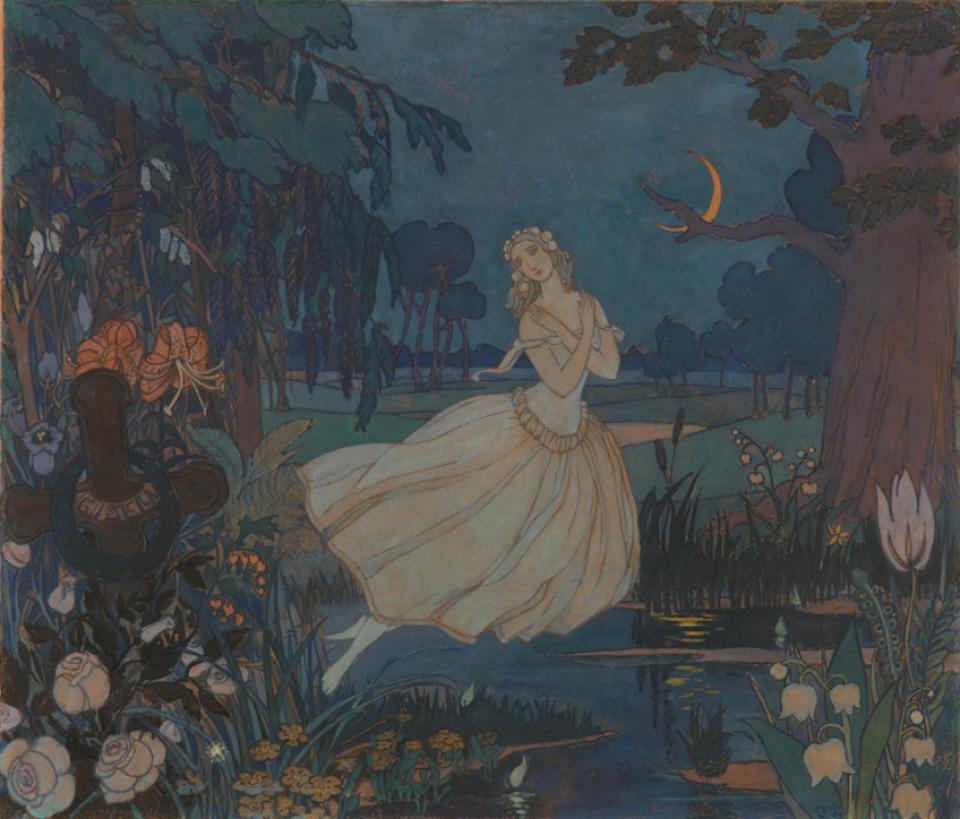 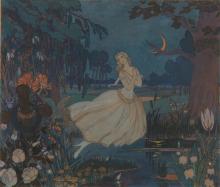 Signature: O.D (in the bottom-right corner of the painting).

The hard-toed ballet shoes (point shoes) and a three-quarter-length tutu (a bell-shaped skirt made of multiple-layered tulle), worn with a tight bodice, associate this scene with a romantic ballet, as ever since the legendary Marie Taglioni’s Sylph (La Sylphide premièred at the Paris Opera in 1832), the costume has been standard dress for ballerinas. The moonlit scene and the cross with the inscription ‘Giselle’ indicate that Giselle, probably the most famous Classical ballet of all time, inspired Olga Schwede-Dubeneckienė-Kalpokienė (1891–1967) to depict a weightless dancer fluttering over a flowering meadow and a forest stream. It is likely that in this decorative composition with its romantic mood, the painter expressed her impressions of the ballet’s Kaunas première after 1931 (the production artist was Mstislav Dobuzhinsky). She painted one of the virgins in the ballet, a Wili, probably the very same Giselle who died of unrequited love. From an iconographic and stylistic point of view, the work is closer to the scenery (1944) and costume (1947) sketches for the ballet La Sylphide made over a decade later by Dubeneckienė-Kalpokienė, which remained unused and ended up in the collection of the Lithuanian Theatre, Music and Cinema Museum.

Reference:  "More Than Just Beauty. The Image of Woman in the LAWIN collection." Compiled by G. Jankevičiūtė. Vilnius, LAWIN, 2012.