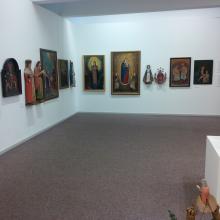 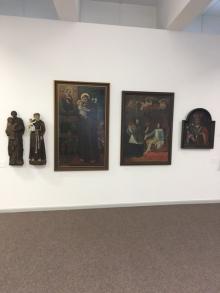 St Casimir is the patron saint of Lithuania and Lithuanian youth. Casimir (1458–1484) was the son of Casimir Jogaila (Jagiellon), King of Poland and Grand Duke of Lithuania. He was born in Kraków and from his early age was trained as a future politician and received an excellent education. He was a pious person and preached poverty and chastity. He died in Grodno and is buried in Vilnius Cathedral. After his death he became famous for his miracles. In 1602, he was canonised. St Casimir is depicted with a white lily and a cross symbolising both piety and chastity.

... Długosz, a great chronicler and canon of Krakow, was St Casimir’s teacher. He taught the young king different languages and proper behaviour. From childhood St Casimir suffered poor health and his sole preoccupation was earning the right to the Heavenly Kingdom. Being particularly attached to the Holy Mother, he wrote three songs in Latin glorifying Mary and spoke them every day.

When St Casimir came of age, in order not to breach his chastity, he practised self-mortification, did not eat royal meals, tied his loins with a sharp chain, did not look at women’s faces, and shunned away from friendships with young people. He valued and maintained friendships with wise and learned men and priests. While living in the city of Vilnius, he attended church every day and prayed so fervently that he did not notice what was going on around him on earth. If he found the door of the church locked, he would kneel and pray at the door. On many occasions the night-watchmen of the city found him lying in the form of the cross at the door of the church.

He supported poor people, widows and orphans as much as he could. If anyone said anything nasty in his presence, he admonished them and did not allow them to talk nonsense. (Motiejus Valančius, „Žyvatai šventųjų“, Raštai 2, p. 163–165)