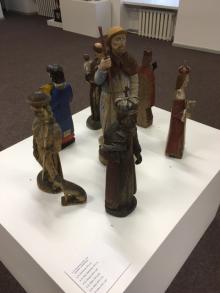 St Roch is a pilgrim saint of French origin who lived in the thirteenth–fourteenth centuries and who dedicated his life to nursing people suffering from the plague. He was born at the time of the Black Death into a pious family of rich and influential traders that took care of the poor. Roch studied medicine. On his deathbed his father asked his fifteen-year-old son four things: serve all those who needed his help, not to abandon God, to inherit his status and assets, and to take care of people ill with the plague. When his mother died, Roch became a begging pilgrim and treated people not only using his knowledge of medicine, but also with the sign of the Holy Cross. Once he heard an angel saying to him in a dream that he would have to face an illness and when he woke up he found a wound above his left knee. Trying to avoid any danger to others, he left the hospital and settled in a cave in a forest. A dog provided him with bread. When he recovered, he travelled home, but was stopped and accused of spying and was imprisoned. He spent several years in prison.

St Roch is considered the patron saint of those suffering epidemic diseases. His attributes are a stick and a bag. He is also depicted with a plague wound on his leg and an accompanying dog. In Lithuania the cult of St Roch strengthened in 1713 after the establishment of the brotherhood of St Roch in Kražiai.