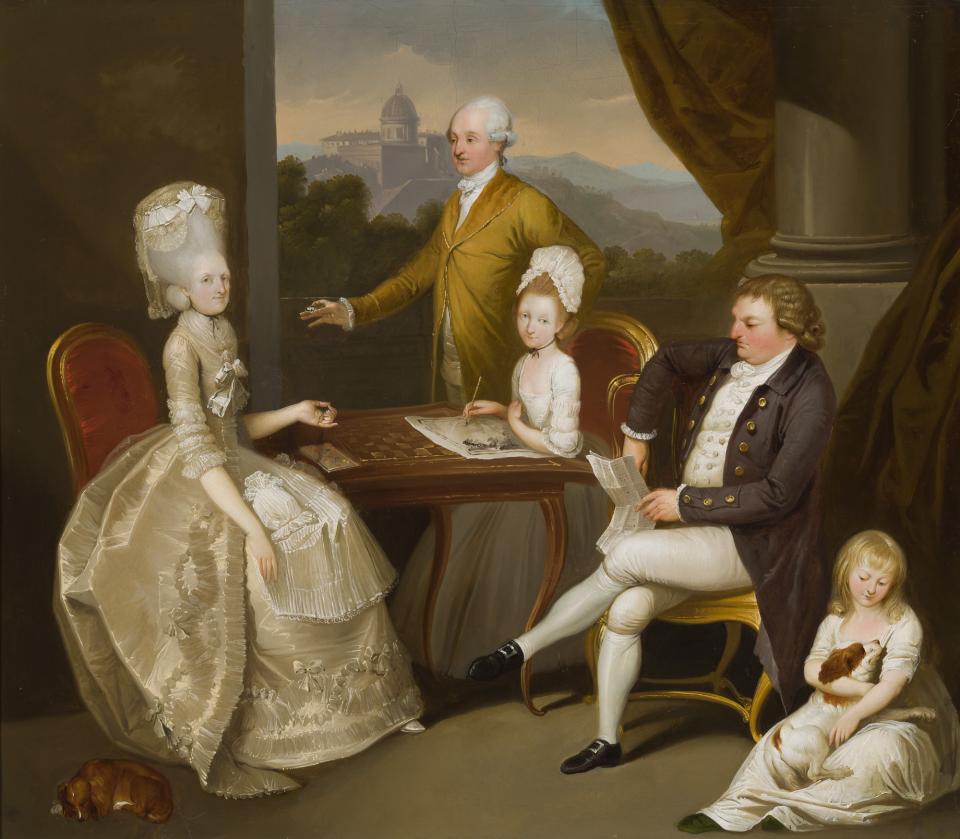 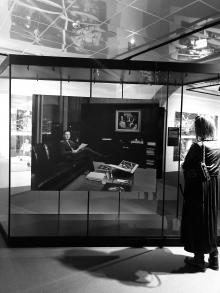 Portrait of The Hon. Aubrey Beauclerk and his Family, in an elegant interior, a view to the Castel Gandolfo beyond

On 4th June 1778, Lady Mary Lowther noted in a letter to Lady Mary Coke that 'Mr Beauclerk, Lady Catherine and Mr Brand were gone together abroad, being so in debt they found it troublesome staying at home'. Their trip abroad may have been arranged to try to escape the rumours of an affair between Lady Catherine and Thomas Brand. The Beauclerks spent almost three years in Rome during which time Smuglevicz painted them twice. One of these portraits is the present work, which depicts the family before the Castel Gandolfo where they rented apartments for the summer of 1779. The other portrait (now in Cheltenham Art Gallery) shows the family in the Roman campagna with an aqueduct in the background.

The attribution of the present painting to Smuglevicz was first suggested by Francis Russell in his Burlington Magazine article in 1978. His attribution was in turn based on that established by Brinsley Ford for his Portrait of James Byres and his family and also for that of the Portrait of James Byres and his family in an interior now in the Scottish National Portrait Gallery, Edinburgh. The present painting compares very well with these two works both in the distinctive, subdued palette and in the meticulous treatment of the drapery, particularly that of Lady Catherine's dress.

Franciszek Smuglevicz moved from his native Warsaw to Rome in 1763 where he trained with Anton von Maron. It may well have been through the latter that Smugelvicz met James Byres, the antiquary, art dealer and cicerone for many British Grand Tourists in Rome. Byres himself commissioned two portraits from the Polish painter, as detailed above, and he is certainly known to have introduced other tourists to Smuglevicz (for example, he recorded payment to the artist on behalf of Philip Yorke, later 3rd Earl of Hardwicke, for a double portrait of Yorke and his Swiss tutor, Colonel Wittestein, most probably the work offered at Christie's, London, 16 April, 1982, lot 16). Very few works by Smuglevicz are known and it is surprising that, given his clear connection with James Byres, he is not known to have executed more commissions of this type for British Grand Tourists in Rome during his 20 year stay in the city.

Saleroom notices: The present painting is included in the article 'A speculative Grand Tour excavation: Aubrey Beauclerk, Thomas Brand and Thomas Jenkins at Centocelle', by J. Yarker and C. Hornsby, in the 'The British Art Journal', December, 2010.