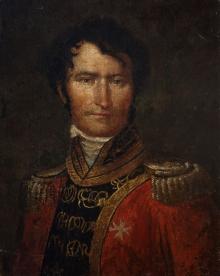 This piece was created by Jan Rustem (1762–1835), who was professor at Vilnius University and the most famous portraitist of Vilnius in the 19th century. The artist is known for his small-format paintings, as well as portraying bodies from the chest up and using neutral dark backgrounds. The people in his paintings exhibit a calm and dignified posture, the free and soft face modelling is emphasized by upper corner illumination, indicating another trait typical of Rustem: the focus is on the face itself, while broader, more generalized brushstrokes are used for clothes and background. The portrait was created when many aristocrats from the former Polish-Lithuanian Commonwealth used to become Knights of Malta. The colours and decoration of the military uniform depended on the unit and rank of the wearer, as well as the intended use for the clothing. When assembling a nobleman’s ceremonial military uniform, the owner could express his fantasy (as well as his funds) without observing extremely strict colour regulations used for battlefield outfits. This piece complements the collection of surviving paintings by Jan Rustem, the gallery of Lithuanian historical persons' portraits, as well as the iconography of the Lithuanian armed forces during the Napoleonic era. It has both historical and artistic value. (by dr. Rūta Janonienė)