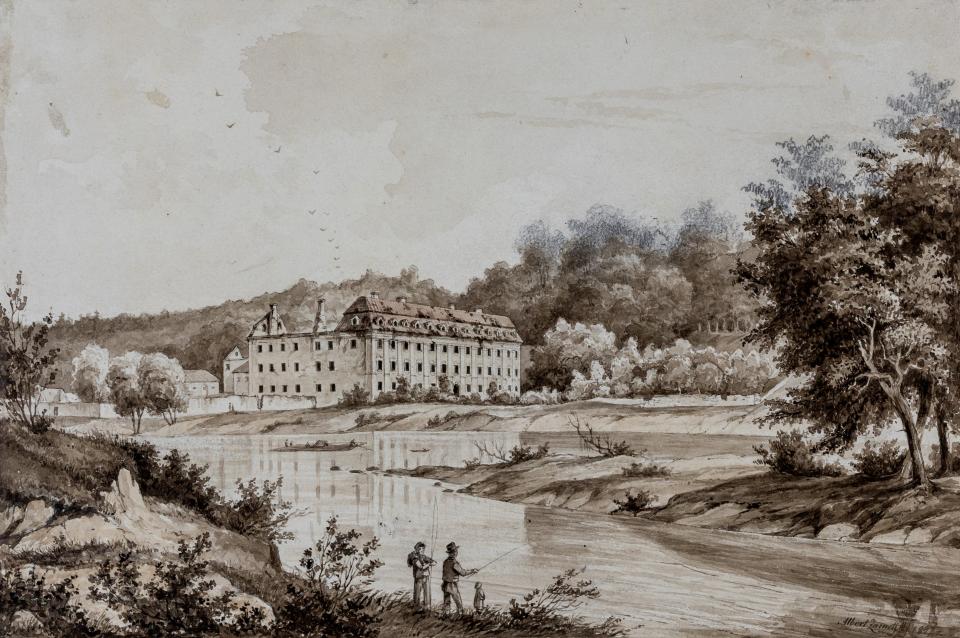 Painter and theatre designer Albert Żamett is one of the most celebrated Lithuanian painters of the mid-19th century. He was born on 25 November 1821 in Vilnius, where, while he was a student at a gymnasium and the Institute of Gentry, he began to study art (as a pupil to Kanuty Rusiecki). With the sponsorship from Count Benedict Tyszkiewicz, in 1840–1847 he went to the St Petersburg Academy of Arts; between 1847 and 1850, he lived in Vilnius and in Raudondvaris near Kaunas; later on, he brushed up his skills in Italy and travelled across France, England, and Germany. The artist was famous for his paintings of Italian landscapes first and foremost: in 1853, he was awarded the title of a ‘non-classicist painter’ from the St Petersburg Academy of Arts for his View of Cascade in Tivoli, and in 1954, a trophy from the Rome Society of Art Lovers for his View of Lake Nemi. In 1859, he was awarded the title of an academician by St Petersburg Academy of Arts; the very same year, he returned to his homeland to become a correspondent member of the Archaeological Commission of Vilnius and then, the supervisor of the Art Department at the Antiquities Museum. In 1861–1863, he and Michał Tyszkiewicz travelled around Europe. In 1864, he returned to Vilnius and lived in his home country until his very death on 12 November 1876 (he was buried at the cemetery of Evangelical Lutherans). The watercolour of the former Jesuit palace in Vilnius was done in 1847 as a collaboration with Jan Kazimierz Wilczyński, the publisher of the Vilnius Album. A lithograph made after this watercolour by Louis Pierre Alphonse Bichebois (1801–1850) and printed in 1848 at the Lemercier lithography print shop was featured in book 1, volume II of the Vilnius Album. The landscape was released as a black-and-white and a coloured version. Comparing this watercolour with its lithographed versions is a matter of some interest, because very few originals of the pieces of work published in the Vilnius Album have been discovered so far. By contrasting these two pieces of work, one can see minor alterations in the arrangement and the picture as such, which are the most evident in the staffage group. In its portrayal of the architecture of the dilapidated palace, the lithograph follows the picture quite closely, even though there are some differences in the details (the rims of the front windows are more intricate in the lithograph). The View of Vingis bears witness to the painter’s excellence and skills in landscape painting: the sensitive and accurate painting conveys the character of the landscape or the details of the palace just as it creates the mood of a calm, bright day. Compared to the lithograph, the watercolour seems somewhat brighter; with it, the painter succeeded in conveying the effects of a spatial perspective better. The flock of birds in the sky and the masterful representation of the reflection of the palace in the waters of the river all add up to the image of the atmosphere surrounding the palace. The iconography of the Vingis palace is rather modest: part from Żamett’s watercolour and its graphic copies, only a few more 19th century pictures capturing this historically and artistically significant architectural ensemble are known to exist. Which makes Żamett’s original watercolour, done on set, very valuable for it may be considered to be a rather reliable iconographic source. As such, the painting is obviously significant as part of Żamett’s fragmented legacy just as it is important in a broader context as a historical document and a testimony to the artistic life of Vilnius in the 19th century. Dr (hp) Rūta Janonienė