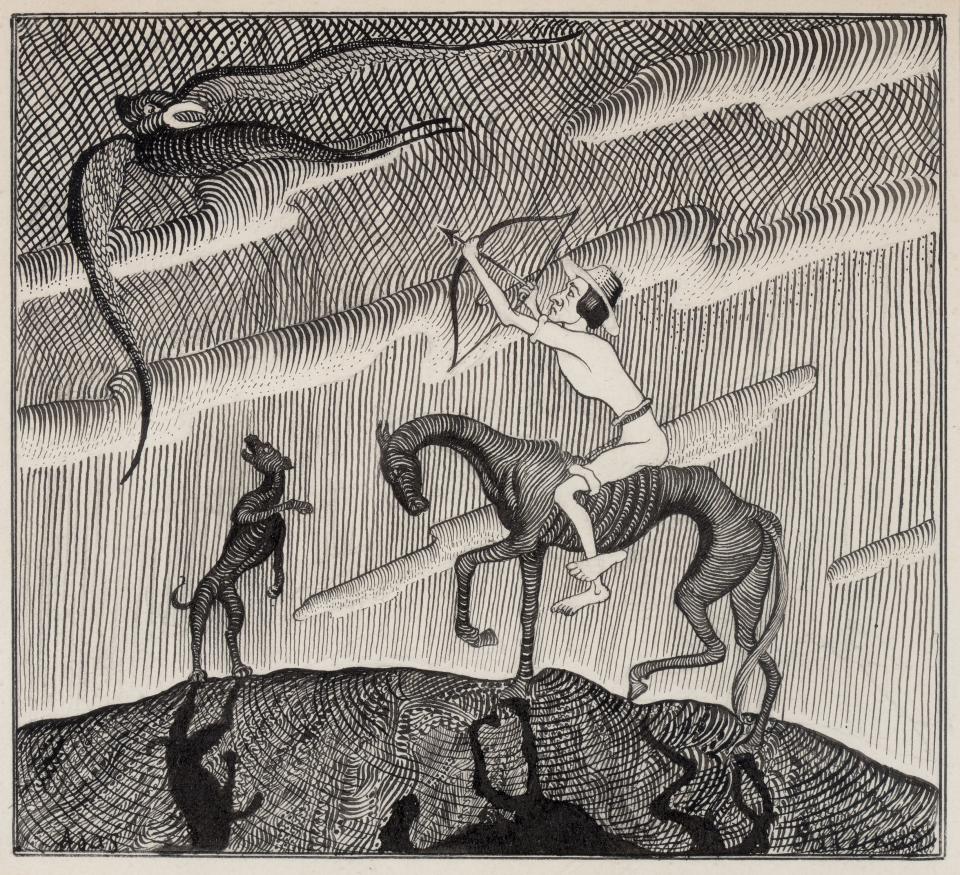 The personal style of ADOMAS GALDIKAS (1893–1969) changed several times in his life. In his early painting, he came under the strong influence of Russian Modernism, expressed by formal features and an indulgence in exotica and theatricality. In his still-lifes, he often painted toys and dolls, substitutes for people and animals in the world of objects. He arranged objects like a theatre director, creating tension, mystery and emotional connections. The term ‘posing nature’ fits his stilllifes very well, especially as, even in terms of form, the composition recalls a stage, with a foreground and a background, and wings.

Adomas Galdikas was a painter, graphic artist, set designer and teacher. He was born on 18 October 1893 on a homestead near Mosėdis, now in the Skuodas district. From 1912 to 1917, he attended the Stieglitz School of Art in St Petersburg. He returned to Lithuania in 1918, and taught drawing at the Saulės Teacher Training College and the Saulės Gymnasium in Kaunas. He plunged enthusiastically into artistic life in Kaunas. He lectured on drawing at Kaunas School of Art during the period 1923 to 1940, supervised the graphics studio, and taught many famous Lithuanian graphic artists. Galdikas was one of the first Lithuanian artists to have a solo exhibition in Paris (in 1931). The same year, the art critic W . George wrote a monograph about him. He was awarded a Grand Prix and a gold medal at the I nternational Exposition of Arts and Technology in Modern Life in Paris in 1937. He taught drawing at Kaunas I nstitute of Applied and Decorative Arts between 1940 and 1944. He emigrated in 1944, and lectured at the School of Applied Art in Freiburg in 1946 and 1947. Between 1947 and 1952 he lived in Paris, and in 1952 he settled in New York in the USA, where he had several exhibitions.

Galdikas’ work, including graphics, paintings, designs for stamps and banknotes, designs for stage sets, and teaching, forms a valuable part of 20th century Lithuanian art. He took a great interest in folk art, and admired ancient sculptures, engravings, small works of architecture, ceramics and folk instruments, which he portrayed in his art, in drawings, watercolours or oil paintings. His work shows strong influences of Expressionism, Art Deco and abstractionism.