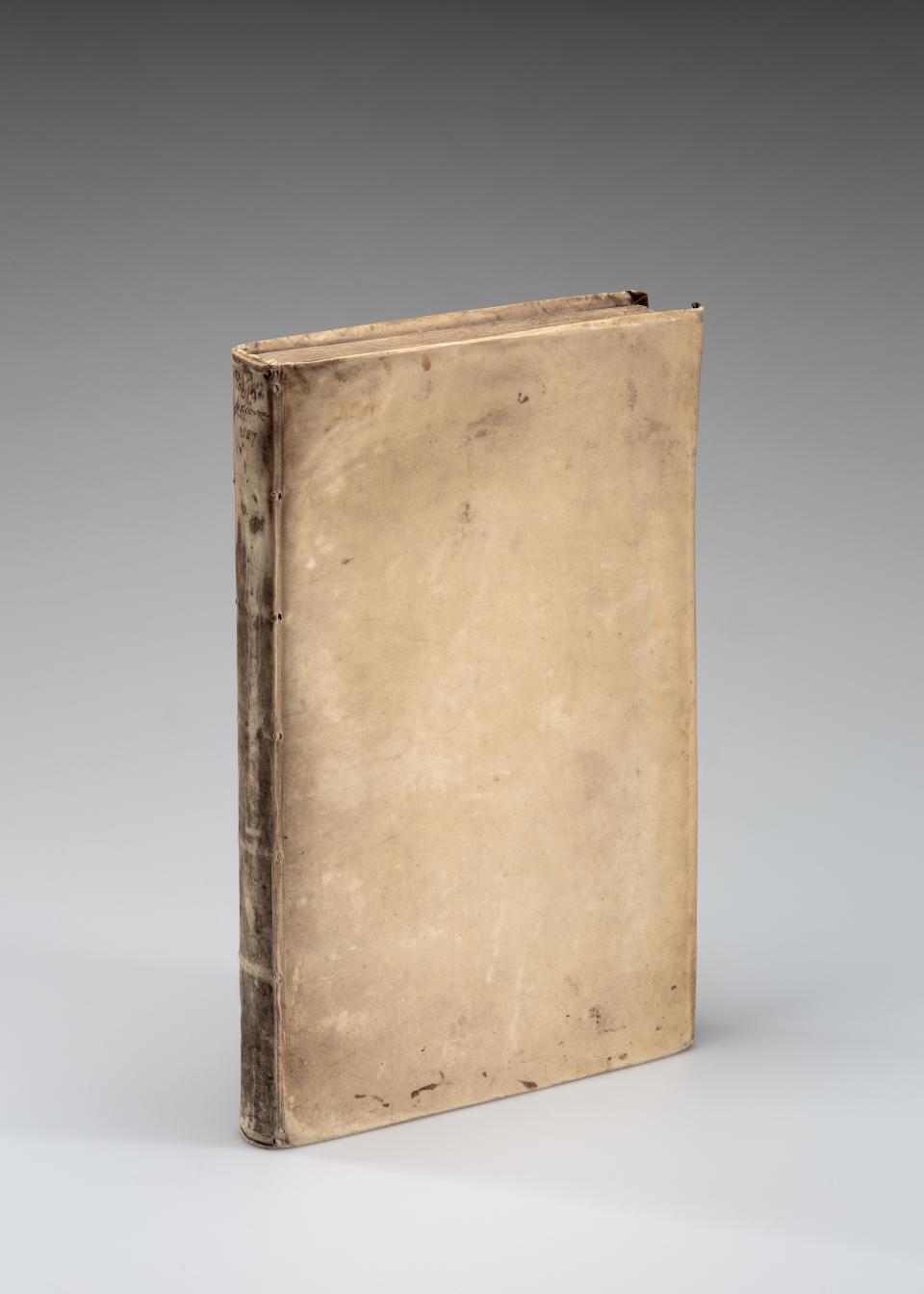 Antonio Possevino (Antonius Possevinus) (10 July 1533 – 26 February 1611) was a Jesuit protagonist of Counter Reformation as a papal diplomat and a Jesuit controversialist, encyclopedist and bibliographer. He acted as papal legate and the first Jesuit to visit Moscow, vicar general of Sweden, Denmark and northern islands, Muscovy, Livonia, Rus, Hungary, Pomerania, Saxony between 1578 and 1586.

Recent scholarship has identified Antonio Possevino's family as New Christians admitted to the learned circles of the court of Renaissance Mantua and its Gonzaga dukes. His father was Piedmontese from Asti and moved to Mantua where he joined the guild of goldsmiths. The family name was changed from Cagliano {Caliano} and his marriage produced three sons, Giovanni Battista, Antonio and Giorgio. His mother nursed her son Antonio in 1533 together with Francesco III Gonzaga, Duke of Mantua 1540-1550. His learned older brother, Giovanni Battista Possevino (1522-1552) arrived in the mid-1540s in Rome of Paul III Farnese, first in the service of the Mantuan cardinal reformer Gregorio Cortese, then of the papal "cardinal nipote" Alessandro Farnese (cardinal) and finally of cardinal Ippolito II d'Este. Some of his poems are in Elogia virorum illustrium (Florence, 1551) of Paolo Giovio whom he frequented humanist court circles. In 1549 at seventeen Antonio came to study with his brother in Rome and met the leading men of letters at the Renaissance court of pope Julius III (1550-1555), the patron of Giovanni Pierluigi da Palestrina and the builder of Villa Giulia. These included Fulvio Orsini and Paulus Manutius. In 1553 he published posthumously the Dialogo dell'Honore of Giovanni Battista who died not yet thirty. In Rome he dedicated the Centones ex Vergilio published under the name of Lelio Capilupi to the French poet Joachim Du Bellay and in 1556 in Due Discorsi he defended his brother against accusations of plagiary and defended the writings of Giovanni Battista Giraldi. His brilliance and literary skills made the young humanist much in demand. When he left Rome he was engaged in service to Cardinal Ercole Gonzaga as tutor to the sons of his brother Ferrante Gonzaga, Francesco Gonzaga and Gian Vincenzo Gonzaga, both future cardinals. He moved with them to the literary capital of Italy, the Ferrara of the Este. Possevino was connected with the Aristotelian revival associated with Francis Robortello and Vincenzo Maggi (1498-1564) that generated many treatises on literary and courtly matters including his brother's Dialogo dell'honore and his early works. When the University closed in Ferrara due to the war of pope Paul IV Antonio moved to Padua. At this time Don Ferrante, his wards' father, died in the aftermath of the Battle of St. Quentin (1557). Possevino had become an expert in the historical training of princes and was writing commentaries on this battle exalting the victory of Emanuele Filiberto, duke of Savoy. This produced a Piedmontese commendature that he had to renounce to become a Jesuit, a severe hardship for his family, as his brother Giorgio was in jail and he was supporting his nephews, Giovanni Battista Bernardino Possevino and Antonio Possevino, both future translators and authors in maturity.

But in Padua and in Naples he came in contact with the Society of Jesus and joined the order in 1559. In 1560 Possevino was accompanied Jesuit General Diego Lainez to the Savoy of Emanuele Filiberto where he bolstered the Catholic Church against heretics and he founded the Jesuit schools at Chambery, Mondovì and Turin. In his efforts to bring the entrenched Waldensians around, he debated Scipione Lentolo (1525-1599), Calvin's emissary to the Italian Reformed community. In combatting the influence of Calvin's Geneva increasingly he gravitated to France. This was at the onset of the Wars of Religion where he sought to rally the Catholics of Lyons together with Jesuit preacher Edmond Auger. He published a treatise on the Mass, Il sacrificio dell'altare (1563) and debated such Geneva reformers as Pierre Viret and the Italian Calvinist, Niccolo Balbani. For the Italian merchant community of Lyons he provided Catholic books, for example the Catechism of Peter Canisius and several other works in Italian. During this time he was put in jail and rescued from his Huguenot captors by influential adherents. In 1565 he successfully defended his order at the Colloquy at Bayonne before the boy king Charles IX and the future king Henri IV who remained a lifelong friend. In 1569 he wrote Il Soldato cristiano for pope Pius V who had it printed in Rome and distributed to the papal troops at the battle of Lepanto. He served as the rector of the Jesuit college of Avignon and then of Lyons where he received the Jesuit General Francis Borgia in 1571 on a journey from Spain to Rome. He was there during the St. Bartholomew's Day massacre. During these militant years he first conceived of the plan of his Counter Reformation bibliographical works, as he states in the introduction to the Bibliotheca selecta.

When Borgia died, Possevino returned to Rome for the third Jesuit General Congregation and stayed on as the Latin secretary to Everard Mercurian, Jesuit general from 1572 until 1578. Pope Gregory XIII sent him to the court of King John III of Sweden in order to influence the course of the Livonian War. During this decade travelling around the Baltic and Eastern Europe Possevino wrote several tracts against his Protestant adversaries, including the Lutheran David Chytraeus, the Calvinist Andreas Volanus and the Unitarian Francis David. After Sweden and Poland Possevino proceeded to the Russian capital of Ivan the terrible and helped to mediate between him and Stefan Bathory in the Treaty of Jam Zapolski in 1582. He left a valuable account of his nunciature in his description of the Tsardom of Muscovy. He also wrote accounts of his travels in Transylvania and Livonia. During these years he helped found, with Piotr Skarga the Jesuit Vilnius University and Jesuit academies and seminaries in Braniewo, Olomouc and Cluj historically connected to present day institutions. Possevino's efforts to bolster the Catholics in Poland under the patronage of Bathory engendered hostility to the Jesuit diplomat at the Habsburg court of Rudolf II reflected at the papal court of Rome.

After his protector Bathory's death at the end of 1586 Possevino was retired from diplomacy by Jesuit general Claudio Acquaviva. He was banned from Rome as too political and exiled to Venetian territory. In Padua Possevino continued to conduct the Ignatian Spiritual Exercises thus influencing the vocation of the Bishop and Saint Francis de Sales there as a student of law. Finally, in Padua began the scholarly project of assembling and organizing the library of orthodox Catholic learning assembled in the Bibliotheca selecta (1593) dedicated to pope Clement VIII and Sigismund III Vasa. His sections were carefully reviewed by the leading professors of the Roman College including Christopher Clavius and Robert Bellarmine. A decade later the theological compendium Apparatus Sacer (1603–06) appeared in Venice. During the 1590s while he was busy as a bibliographer he was also active in pastoral work in his native Mantua and at the court of duke Vincenzo Gonzaga. Two missions on the status of the Jesuits in France brought him into renewed contact with king Henri IV.

In Venice Possevino served as a leader of the vecchi against the anti-papal giovani who supported Paolo Sarpi and had contacts with French and English ambassadors. Following the Interdict of 1606 of pope Paul V against Venice Possevino was banished with the Society of Jesus from the Republic of Venice. He was sent to relative obscurity in nearby Ferrara where he wrote several polemical tracts under various pseudomyns concerning the pro-Catholic False Dmitriy I, the Venetian Interdict and other controversial issues. Having outlived his role during the Counter Reformation as the political Jesuit intellectual, par excellence, he died in 1611.